Ah, winter. At the first bite of chill in the air and the first sign of snow on the ground, local supermarkets roll out buckets of snow shovels that get snapped up by shoppers in ten seconds flat.

Unfortunately for the people who buy them on impulse, they often aren’t a great deal since they typically last about one winter at a maximum. Luckily for you, we’ve pulled together a list of snow shovel options that will last longer than ones on special at the supermarket, and that will help you help you clear paths and driveways even faster.

When you’re shopping for a snow shovel, here are the three key things you need to look out for:

The Bulldog Snow1 shovel is one of the hallmark products made by Bulldog Tools. 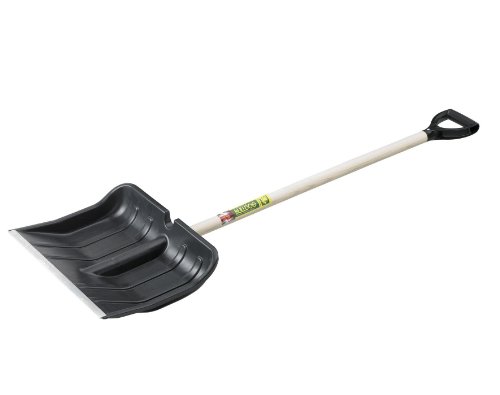 Bulldog Tools is a company that has manufactured and distributed British-made gardening, contracting, and farming tools since it was established in Wigan, England all the way back in 1780.

Some of their brands include notable names like Bulldoza, Evergreen, Insulated, Powerlite, and Premier. They’re especially known for their eponymous Bulldog range which includes garden spades and forks forged from a single piece of steel in order to make them incomparably strong, and they use the same attention to detail to all their other tools, including tolls, rakes, and hoes.

Bulldog uses sustainable timber, and every product they meet exceeds the British standard of 200 pounds of pressure.

While Bulldog’s summer gardening tools are respected as being some of the best in the business, their winter tools are nothing to sneeze at either. The Bulldog Snow Shovel is ideally suited for cleaning snow out of home driveways and workplace car parks.

The large size of the snow scoop makes it an easy and quick task to move large amounts of snow in a single pass. The durable but lightweight plastic design makes it a light enough shovel for just about anyone to use, while the reinforced metal front edge helps chip away any tricky ice and maintains the integrity of the shovel’s shape.

A long ash shaft made from sustainable wood gives the shovel extra leverage so that you can shift snow out of your way more efficiently, and a plastic D-top at the end of the handle provides ergonomic comfort. 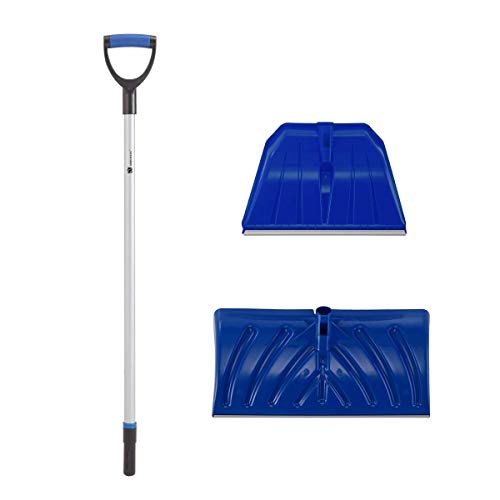 This snow shovel is a very close second to the Bulldog Shovel for us: in fact, it was really the slightly more competitive price on the Bulldog is what really pushed us over the edge, as the Orientools 2 in 1 Snow Scoop has plenty to recommend it on its own merits.

The big selling point are the two interchangeable heads which come with this tool; a snow pusher and a snow shovel. Both are metal tipped and can be swapped out using a simple clip system meaning you’ve always got the right attachment for the task at hand. The rubber D-Grip handle makes it easy to hang in your cupboard or garage and offer a comfortable, ergonomic, position when in use.

The edge of the plate is made of stainless steel to prevent rust, and it’s double-pressed and slightly curved to prevent the plate from catching and dragging on the pavement. The combination of materials makes for a shovel that is heavy-duty, stable, and long-lasting, while still being remarkably lightweight. 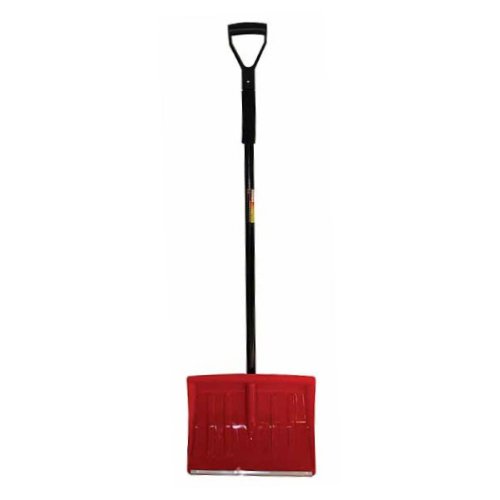 The Blackspur Snow Shovel is the perfect combination of durable and lightweight. Its squared-off shape, cheerful colour scheme, and ergonomic metal handle make it ideally suited for clearing snow away from garden paths. It may not be the fanciest shovel on the market, but what it lacks in bells and whistles, it makes up for in reliability and strength. 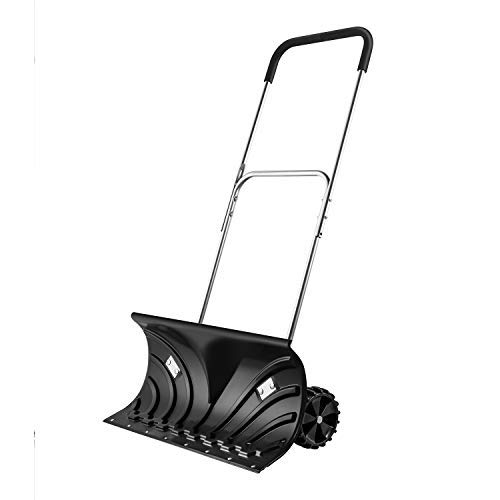 Now, if you’ve been thinking all these sleek, unfussy snow shovels aren’t the ones for you, don’t worry: we’ve got one that has ALL the bells and whistles for you.

The Orientools Heavy Duty Rolling Snow Pusher is a manual push plow with an extension steel handle that makes it simple to clear away even massive piles of snow.

This push plough is outfitted with grippy six inch pivot wheels which allow it to have incredible traction even in slippery, icy conditions. It efficiently scoops through snow that’s up to five inches deep in a single pass, and its adjustable height allows you to stand upright and clear more snow more quickly without cramping your back bending over.

While the Orientools Rolling Snow Pusher looks large and bulky, it is quick and easy to disassemble for storage.

How To Cleaning Snow As Quickly As Possible

Still frozen with indecision of which snow shovel is right for you? Let us help you narrow it down by sharing our tips and tricks for cleaning snow as quickly and efficiently as possible from paths and driveways. Knowing what factors are important in fast and easy shoveling might help you make up your mind: